LIC is one of the largest farming cooperatives in New Zealand, formed to improve the prosperity and productivity of farmers. They wanted to transform paper-based herd management by developing a smart, comprehensive mobile app that enabled farmer’s to manage their herd from the palm of their hand.

Together we crafted the MINDA mobile app, empowering farmers to quickly and easily manage the health of their herd and make critical on-farm decisions wherever they were. With 3,500 farmers using the MINDA mobile app every month, it has become an essential tool for its users.

Farmers often work 14 hour days, rain or shine, in rough conditions, then come home to spend hours in the office transcribing the day's herd events into their PC. The process can be tedious and prone to errors. They  must have this information to make critical decisions that can improve the welfare of animals and their profitability. The ability to act on this information sooner means healthier livestock and savings in time and money. To give farmers this capability, MINDA needed to become mobile. LIC wanted every farmer to have this power in the palm of their hand.

Enlighten began development on four mobile applications, each based on the existing tool but focused on four key areas of business; Lookup, Calving, Pasture and Mating. We built each app independently to get solutions to market quicker and gather user feedback.

The apps were released into the wild, and while each of the apps integrated well with each other the number one piece of feedback from farmers was that having a single app would be a faster, more cohesive and intuitive user experience. 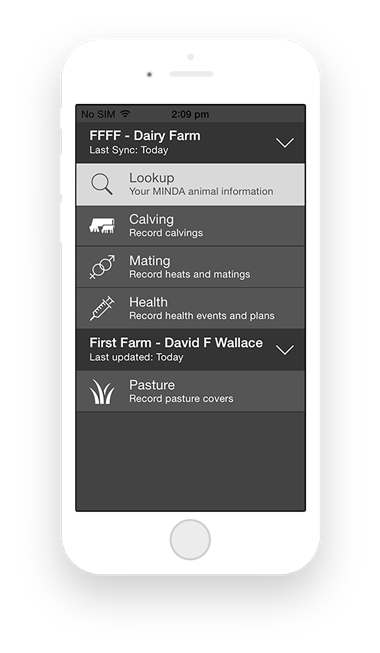 We built the single MINDA mobile application and incorporated all four apps as one, which were now features of the centralised tool. It was designed to work with farmers, so the application needed to work offline when they were in remote locations and would wait until they were back in coverage before updating to LIC's database.

LIC's customers were using an even split between iPhone and Android so it was important to cater to both. Typically when developers build applications they need to build one for iPhone and one for Android, which is essentially two projects running in parallel. Enlighten developed all mobile features using the Xamarin platform. This meant we could build a single code base for both devices, which significantly reduced the time and cost of the project. Development was so smooth that LIC commissioned a brand new feature, Health, which was also available on the single MINDA app.

Within three months, Enlighten delivered MINDA on both iOS and Android, a single app for Calving, Lookup, Pasture, Mating and Health. To access this new experience farmers only had to download once and do one sync of their farm's data.

The MINDA mobile application was presented at Fieldays 2015. LIC gave farmers access to their information wherever and whenever they needed it. The application is now being used by 3500 users each month. Farmers have eliminated wasted time entering and searching for data and have drastically reduced errors.

Having a single app meant both LIC and customers were using less data and freeing up more space on their phone. As a result of having all applications built on one code base, the cost of maintenance to LIC is lower and the ability to add features, promote additional services and continuously improve the software is both simple and cost effective.

The MINDA mobile application is now a core tool for both LIC and farmers and is key in enabling them to make better on-farm decisions.